Split Win and Loss over the Weekend, Back to Work We Go

The young men of Middlebury men’s tennis began last weekend with a 9-0 victory over Trinity (Conn.) here on our home Proctor courts. After a rain delay we moved inside to play our doubles prosets, with Will/Lubo and Peter/Timo winning with scores of 8-4. Playing #3 that day was Allen/Kyle, putting an 8-0 victory on the board to finish the sweep. In singles, after moving back outside, the Panthers refused to lose a set. This included freshman Alex V. at the #6 spot, concluding the 9-0 victory for the Panthers in preparation for our match against #8 Wesleyan (Conn.) that next afternoon.

In doubles we were put in a hole early against the talented Wesleyan team, going down breaks in multiple prosets. Peter/Timo were first off with an 8-3 loss, making good plays but making unforced errors throughout the competition. Later on things got scary as our #1 team of Lubo/Will served 6-7, 0-40, triple match point, while meantime Kyle and Hamid were fighting to stay in their respective match. Incredibly Will and Lubo came back to hold that game, taking the comeback all the way to the finish with a 9-7 victory to even the score at 1-1. Kyle and Hamid lost by a score of 8-6 at #2, and there we were 1-2 going into our six singles matches. Bob reminded us that we had been put in situations like this before, this was a real test but one we were optimistic we would handle.

At #2 singles Will de Quant played an absolutely inspiring match to even the overall score at 2-2 with his straight-set victory over a very strong Michael Liu. Hamid battled in the second set against his opponent at #3 singles, getting breaks back after getting broken, but in the end it was a Wesleyan victory. Timo was doing everything he could to turn his match around against a very strong Cameron Daniels, but with a 7-6, 6-2 loss, the Panthers were down 2-4 with three matches remaining. The battle persisted as all remaining players (#1 Lubo, #4 Kyle, and #6 Allen) found themselves in third sets. Both Lubo and Kyle were able to hang tough and eventually broke away in amazing fashion to even the score at 4-4 with 6-3 third set victories. Allen fought with everything he had in his third set, but in the end it was a Wesleyan 5-4 victory. We fought extremely hard that day, losses like that are never easy to stomach, but hey, that’s sports. Back to work with some new motivation and an overall knowing that we will learn and grow from this experience. Eyes on the prize: NESCAC'S and NCAA's. 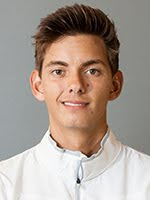 Favorite tennis player growing up and why: Roger Federer…Everything he does just seems so effortless. He is also the best player in history so there isn’t much you can dislike about the guy.

If you could travel anywhere in the world where would you go and why: Peru…I’ve always enjoyed adventurous vacations and in Peru I would be able to hike Machu Picchu, rock climb, surf and just explore the area.

Why you chose Middlebury College: I’ve always wanted to be part of a national championship program as well as study at a top college. It just so happens Middlebury offers both.

Plenty of action ahead as Middlebury plays #13 Amherst (@Amherst) at 1pm on Sunday April 30th. This will be our last regular season match as we prepare for the conference tournament the following weekend in Williamstown. Please stay updated via twitter, facebook, and Instagram, and as always big thanks to parents, families, and fans for your amazing support.

Big win on the road against Bowdoin, on to this Weekend’s Home Matches 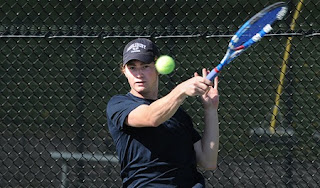 After a 2-0 effort last weekend against conference opponents Colby College and #4 Bowdoin College, the young men of Middlebury men’s tennis are back in action. This afternoon we will play Trinity of Connecticut, followed by a 2pm match against #8 Wesleyan on Sunday. Our last weekend’s victory over Bowdoin College was a great win, feeding our momentum as we hit the home stretch of our 2017 season with the NCAA’s in sight.

The Saturday morning match against the Polar Bears began with an impressive win by #1 doubles team Will de Quant and Lubomir Cuba (8-4). After a tough loss against Colby the day before, Will and Lubo came out determined, imposing their doubles early and never looking back. After a tough 8-5 loss by Hamid and Kyle at #2, almost finding their way back from a 2-7 deficit, we were tied 1-1 with our #3 doubles team still on court. Timo van der Geest and sophomore Peter Martin were on serve late in the pro-set, playing incredibly strong and imposing doubles as the match went the distance. Fighting off break points, stuffing poaches through the middle, both Peter and Timo played bold and aggressive. At 7-6, stringing four fantastic points together, Peter and Timo broke serve and put the Panthers up 2-1 going into singles.

In singles our boys looked strong and steady, each guy showing commitment in their match as we knew we had a lot of work ahead of us. With Bowdoin winning a very close 6-4, 6-4, match at #2 singles against Will the score was tied at 2-2. Senior Hamid Derbani came up with a huge straight-set (6-3, 6-2) victory at the #3 spot, and with yet another inspiring effort by Lubo at #1 singles (6-2, 2-6, 6-2), the Panthers were up 4-2 with three matches left. Timo lost a well fought match at #5, and with that it was up to Kyle and Allen at the #4 and #6 singles spots to determine the outcome of this day. Kyle solidified the victory with a 6-2, 6-2, score, keeping the Panthers undefeated D3 streak alive. You might be asking yourself how a match of this score could be one of last matches to finish on the day, with typical Kyle fashion the points were long, long, and longer. Kyle’s ability to stay in the point as long as necessary, matched with his determination to win every point, continue to show why he is such a tough opponent. Last was a brilliantly played third set by senior Allen Jackson to finalize the day with a 6-3 victory.

Favorite tennis player growing up and why: James Blake. I like him because he slapped forehands but was also pretty good at volleys, and he was an all-around good guy.

If you could travel anywhere in the world where would you go and why: Amsterdam, because I really enjoy the Dutch people.

Why you chose Middlebury College: For its academics, tennis, and vibrant social scene.

Peter is currently in his second season with us and is really starting to catch his stride. He has recently cracked our doubles lineup and is playing exceptionally well within our extremely challenging conference. It is always a joy to see players in this program make jumps and leaps, Peter is doing so with a extremely committed effort to not only his game but to this team as well.

Middlebury Men's Coaching Staff
Posted by Coach Parmelly at 8:35 AM No comments: