After 3-0 weekend, Panthers are headed to Texas

Last weekend was huge step in the right direction for the young men of Middlebury men’s tennis. Before we move on to the challenges that we will face ahead during our spring break trip here in Texas, we would like to do a brief recap of this successful past weekend. If you are looking for exact scores and match breakdowns, please go to our Middlebury College Men’s Tennis website.

Our first match of the weekend was against Brandeis University on our home nelson indoor courts. Hamid Derbani returned to our doubles lineup at #2 with partner Kyle Schlanger, and the Panthers went on to sweep at all three doubles matches. The momentum didn’t stop with straight set victories from Lubo, Will, Kyle, and Alex Vanezis. Our only two loses were by Timo and Allen, who ended up coming up short in very close super-tiebreakers after the conclusion of the match had been decided.

After a couple of hours to eat and shower we jumped in the vans and headed to Troy New York for the Sunday double-header. We had our typical Chipotle dinner and turned in early as we would be playing a RPI early that next morning. The Panthers jumped to an early 3-0 lead early with 8-5 victories at all three doubles spots. Lubo/Will, Hamid/Kyle, and Timo/Allen, all played our type of imposing doubles, setting the tone as we headed into singles. Our singles went on to be a fantastic effort, winning at all six spots and finishing the morning with a 9-0 victory. Will dominated his match at #1, Kyle and Timo won in an action-packed super-breakers, while Allen, Alex V, and freshman Weston Brach won in straight sets. Next up was our toughest of the three schools, #26 Skidmore College.

The boys started with amazing energy and drive as we jumped to early leads at all three doubles spots. Skidmore plays tough aggressive doubles and it was exciting to see how we reacted. Lubo/Will and Hamid/Kyle went on to have dominating wins, while Allen/Timo put themselves in a hole as their opponents served for the match at 7-6. With some serious grit and clutch play, Allen and Timo went on to win the match 8-6 in the tiebreaker. Sweeping 9-0 in doubles on our three matches over the weekend was a real accomplishment, something the boys definitely earned with their doubles work given over the months prior.  The singles matches were extremely competitive and intense that Sunday afternoon, we coaches were extremely pleased with how our boys elevated their games to the challenge. With straight set victories from Lubo (against a very tough #5 Kai Yuen), Will, Kyle, and Allen, the match was decided. Both Timo and Alex V. ended up losing in very close super T’s, not taking away with how well they played that afternoon. Overall it was a great weekend, packed with highlights and lessons to learn as we returned to practice later that week. 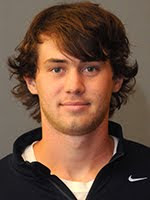 Favorite tennis player growing up and why: Gael Monfils because the guy is an absolutely unreal athlete and makes tennis incredibly entertaining to watch

Favorite movie: The Lord of the Rings, it’s too hard to pick a particular one

If you could travel anywhere in the world where would you go and why: Westworld because it provides an incredible interactive experience in a western setting

Favorite Middlebury tennis moment thus far: Probably the win over Bowdoin in season last year. We had a pretty big, rowdy crowd, and the atmosphere was great for a really tight and important match

This is Cole’s second year on the team here at Middlebury. He is an incredible athlete, occasionally letting our team know this by blowing by them during our sporadic 200m races (Prefontaine style…), and continues to improve at an impressive rate. Especially this season we have seen major growth in Cole’s tennis game as he adds dimensions of control and ball tolerance to his natural tracking skills. He is an amazing teammate and member, always providing concern and action to our overall team mission.

Today is the first day of our spring break trip, 10 days in Texas with 8 competitive dual matches. Our schedule looks like this for the week:


Middlebury Men’s Coaching Staff
Posted by Coach Parmelly at 9:04 AM No comments:

The 3rd ranked Panthers of Middlebury Men’s Tennis came out swinging last weekend with an 8-1 victory over Bates College. Before we look ahead to this upcoming weekend of matches we would like to do a brief recap of this solid season-opening effort. With the decision to sit senior Hamid Derbani due to a minor injury, new faces were put into the lineup. Being put into competition last minute isn’t easy and we coaches were very impressed with how our boys adapted.

We put ourselves in a hole early against some strong doubles teams of Bates College. At third doubles Allen and Timo went down an early break and were not able to recover. They fought to the very end but lost with a score of 8-4. At two doubles Peter Martin and Kyle Schlanger were on serve most of the match until facing a break in the middle of their pro-set. Around the same time Will and Lubo went up a break only to get broken back as the match intensity rose on both courts. Lubo and Will went on to break again and close out their top doubles match with a firm 8-5 victory. Tied 1-1 the only doubles spot remaining was our two team of Peter and Kyle as Bates served for the match at 7-6. Major props to both Peter and Kyle who played a fantastic break game to keep them in the match. A solid hold later and now Bates was serving to stay in the match at 7-8. With some solid returns and clutch play, Pete and Kyle went on to break and put the Panthers up 2-1 overall going into the singles.

First off was a fantastic match played by Timo at number four singles. With a 6-1, 6-2 victory Timo maintained a very high level of play from start to finish, attacking his opponent from both the baseline and finishing at the net. Kyle was next off with a straight set victory at number three singles. Up a set but down 4-1 in the second, Kyle went on to refocus and claim five straight games to clinch his match 6-1, 6-4. The overall match was clinched for the Panthers by our top singles player Lubomir Cuba. Lubo played a very tough opponent in Ben Rosen, but managed the momentum swings of the match very well with a 6-4, 6-2 victory. Next off was senior Allen Jackson who played simply amazing tennis from start to finish with a 6-1, 6-1 victory. Allen’s road to get to this point has been long and tough, and both coaches and players were very happy to see him put forth such a dominant performance. Number two singles Will DeQuant came off next after toughing out a very tricky match in a third set super breaker against his Bates opponent 6-0, 6-7 (9), 10-8 (ST). Will showed some great composure in not letting frustration get the best of him, putting himself in position to take the match when given the opportunity. Last off was freshman Alex Vanezis at six singles with a 6-1, 6-3 victory. Alex played extremely well for most of his first match as a Panther and should be extremely proud of his effort. Looking back, it was a great start to the season with many highlights and lessons to be learned, thanks to everyone who came out to support us. 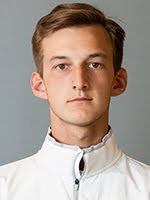 Year: Freshman
Height: 6’01
Weight: 170
Major: Undecided (Econ/Comp Sci)
Favorite tennis player growing up and why:
Marat Safin, Incredible player. Could not be beat when he was on.
Favorite movie: War Dogs
Favorite food: Sushi
Favorite Ben and Jerry’s ice cream flavor: Cookies and Cream
If you could travel anywhere in the world where would you go and why:
The Netherlands. I’ve never been and would love to explore.
Why you chose Middlebury College:
Incredible liberal arts education at a school that is a great fit for me.
Favorite Middlebury tennis moment thus far:
Playing the Midd Invite at home. Great atmosphere.

Aleks is one of our three freshman that we have on the team this year. He is a very strong athlete and skilled player who has been taking on all training, conditioning, and lifting we have thrown at him without complaint. He has already had some breakthrough moments with his tennis this season and we cannot wait to see where he takes his moving forward. Eager to learn and selfless with his teammates, Aleks is an addition to this team that we coaches are very grateful for.

This upcoming Saturday we will be hosting Brandeis University at 9:30am. We will then get on the road to play RPI that next Sunday morning at 9am at their courts, before driving to play Skidmore at their home courts that afternoon at 3pm . It is going to be a very testing weekend the us, but getting comfortable at being uncomfortable is an essential piece of our training. We will keep you posted,