The 2015/2016 season got off to a great start on the heals of our run last season to the finals of the NCAA Team Championship.  Many thought we overachieved but the heart of this team and the evolving skill set makes for great optimism going into this season.  Individual event details from the fall can be found on the Middlebury Athletics web site, I would like to share some of the highlights. 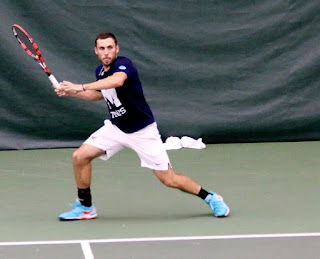 Senior Ari Smolyar, who ended last year as the top ranked player in our region, started a bit rough coming off an intense internship.  As the top seed at the Midd invite he lost in the semi’s to a player he had beaten badly the year before.  At the ITA Ari looked a bit sharper advancing to the quarters before losing to eventual finalist Luke Tercek of Bowdoin.  Ari played an invitational at Dartmouth and his game was back in high gear as he battled three Div 1 opponents beating one in straight sets, losing to one in three sets and one in two close sets.  Ari wrapped up the fall going 3-0 in singles at the Tufts Invitational.   Besides his role as a captain on this year’s team, Ari will play leading roles in singles and doubles. 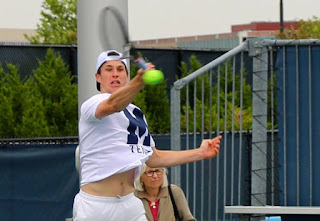 Senior captain Palmer Campbell comes off his run to the semi finals of last year’s NCAA doubles tournament with a strong summer of training and taking his game to new levels.  He reached the semi finals of the Midd invite A flight losing to team mate Noah Farrell, lost to finalist Luke Tercek at the ITA Regional, and again in a much closer match at the Bates Invitational. He then went 3-0 at the Tufts Invitation in singles and doubles.  His drive and passion for excellence will be key drivers on this year’s team. 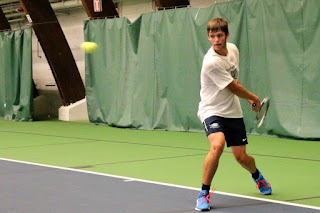 Senior captain Allen Jackson lost in the first round of the Midd A flight in three sets to Skimore’s top player, won two strong rounds at the ITA Regional, beating two quality players, before losing in three sets to Wesleyan’s top player.  Allen reached the quarter finals at the Bates Invite and went 3-0 in singles at the Tufts invite.  Due to a serious injury Allen will be taking Spring semester off to have surgery.  Although he will be greatly missed this year by everyone in the program, Allen’s drive, leadership and passion will be key factors to steering next year’s team as he plans to come back and play his final season. I continue to be amazingly impressed with how Allen Jackson handles adversity. 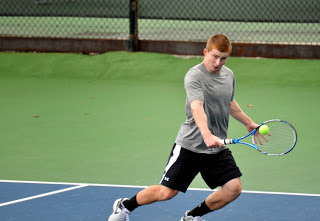 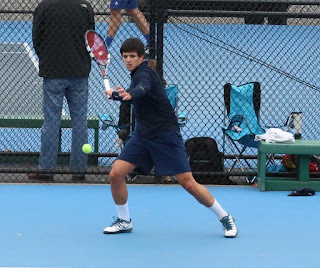 Our lone junior Hamid Derbani was coming off a year where he did not play due to a wrist injury.  He was unable to play until the final event of this fall where he debuted his big burly, but rusty, game.  It was not pretty at first but all of us saw his huge potential which now is unveiled on a regular basis.  Not knowing exactly where Hamid has the potential to be a major contributor in both singles and doubles. 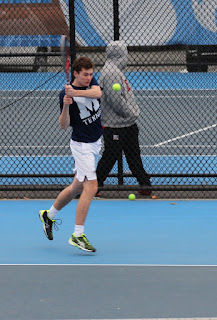 Our sophomore class continues to shine.  No one quite expected them to be so good but the cat is now out of the bag and they continue to impress.  Timo Van de Geest is one of our hardest workers and most improved players.  Timo lost in the quarters at the Midd Invite, won his first two rounds at the ITA event before falling in three sets to one of Tufts top players. He lost early at Bates and then went 2-1 at Tufts.  With more match experience Timo will prove to be a force going forward. 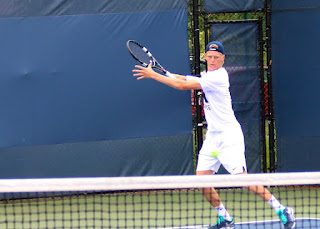 Will De Quant produced far more than expected last year with his massive improvement.  The good news is he is continuing to improve and had fall results to show, winning his flight at the Midd invite with two straight set wins and two clutch third set breakers.  At the ITA event Will beat the second seed, Carl Reid of Colby, in three sets before losing a close in the second round.  At Bates Will played the A flight and beat a top Tufts player in the first round and lost in three sets to the eventual tournament champion from Bowdoin.  At the Tufts invitational Will went 3-0 in both singles and doubles. 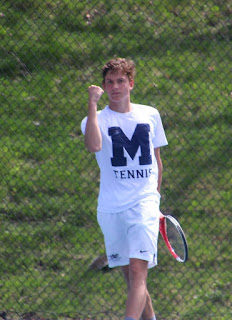 Kyle Schlanger entered the year bigger, stronger and healthier, than last year and it shows!  Training consistently Kyle is better in all phases of the game.  He reached the quarters at the Midd Invite, the finals of the Bates Invite, dropping the final in three close sets to an opponent who beat him handily last year, and finished the fall with a 2-1 record at the Tufts Invitational.   Look for him to be a solid contributor this season pushing for a spot in both singles and doubles.

Charlie Oberrender keeps all the rest of the sophomore class in check helping lead on and off the court.  At the Midd Invite he and Cole Sutton reached the semi finals in doubles.

I am happy with our contribution from our freshmen class as Peter Martin and Cole Sutton are now firmly planted in the heart of the team and getting better rapidly.  Our other freshmen, Alejandro Perez, has been unable to play due to recovering from shoulder surgery.   Peter opened the fall with a win in his flight at the Midd invite before falling to the eventual champion in the second round.  Peter had a similar result at Bates winning his first round and then losing a close match to the eventual flight winner in a close match.  Peter concluded the fall going 2-1 in singles at the Tufts Invitational.  Cole lost his first match at our invite but bounced back at Bates losing to the eventual flight champion in the semi finals.  At Tufts Cole went 3-0 in singles. 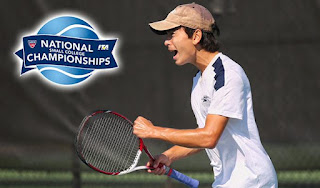 Soph Noah Farrell had a blistering fall playing in five events without dropping a set in Div lll competition!  He won the A flight at the Middlebury Invitational, won the tough ITA Regional, beat Amherst’s top player at the Dartmouth Invitational, won the ITA National Small College National Singles Championship, and then went undefeated at Tufts.  Noah was Middlebury’s first men’s player to win the ITA National Small College Singles National Championship and the first since 2009 to win the ITA Regional singles title.  Currently ranked number one in the country in Div lll Noah adds tremendous strength at the top of our singles and doubles lineup along with a very mature perspective on the team and his role.

Overall we had a wonderful fall adjusting to the loss of our seniors, incorporating our freshmen, and building momentum for the spring.  Many thanks to Courtney Mountifield who stepped up in his role as assistant coach following on the heels of his multitude of contributions as a player.  He provides stability, continuity, and great insight having been a player for all of my first four years at Middlebury.  It is not always easy to coach teammates and Courtney has done a remarkable job on all levels.

We are all super excited to have Courtney back for the spring but also to have Bryce Parmelly join the Panther program after his many years of service at UC Santa Cruz.  You can get more detail about his background from our website, he was deeply connected with many championship drives as a player and coach and will be a tremendous asset to the this program and athletic department.  We are very fortunate to have him and I am thrilled with his potential impact.

We will be adding a season preview soon but for now thanks to all of you for your ongoing support of Middlebury Panther Tennis.  I could not be more happy or excited about this season and the wonderful group of players, families and fans I have to work with.