With the team match tied at 4-4 every individual in Nelson Arena huddled around the final singles match to witness its’ conclusion. Timo Van Der Geest was in a war with the very talented number six player of Wesleyan from Connecticut, both players fighting with everything they had to push their teams to victory. It had been an extremely intense match for these two top ten teams, swings of momentum constantly changing, but with Timo up a set and a break it was looking good for the Panthers. Serving for the match at 5-4 Timo was broken as his opponent played amazing tennis to keep Wesleyan alive, the Wesleyan bench screaming at the tops of their lungs now knowing that this match was far from over. Cool as a cucumber Timo hit back hard to give himself a break point opportunity to go up 6-5 serving, it was clearly the biggest point of the match. The rally was long and the silence palpable, but with a short ball in front of him Timo was fearless as he ripped a forehand winner up the line, pumping his fist to his nearby screaming teammates. Timo collected himself and walked out to serve for the match yet again. He played brilliant and composed tennis as he clinched the match for the Panthers, pushing his team through their first real challenge, and demonstrating true courage and character.

We now find ourselves in Los Angeles California about to play the biggest dual match of our season thus far against number eight Pomona-Pitzer Colleges. After a long day of flying and little sleep last Friday our boys started this spring break trip Saturday afternoon against division two opponent Concordia College. With a doubles sweep and an early 3-0 lead the panthers locked down winning five of the six singles matches and finishing with an 8-1 victory. Easter Sunday we faced a solid division three opponent Lewis and Clark College of Portland Oregon, coming out swinging hard yet again. We found ourselves up 3-0 after a tenacious doubles sweep, having saved match points at third doubles by Will De Quant/Timo Van Der Geest. The Panthers went on to win all six singles matches for a 9-0 finish, including a gritty super-tiebreaker victory by sophomore Noah Farrell who continues to stay composed under pressure. Yesterday was our best doubles effort thus far as we swept Biola University dropping a total of four games collectively. We played aggressive and imposing doubles at all three spots, demonstrating the type of doubles we know we are capable of. We went on to sweep all six singles matches and had great efforts by all players including Panthers not usually in our top six singles spots. Kyle Schlanger, Peter Martin, and Cole Sutton all had straight-set victories adding to the dominating 9-0 victory. For specific scores/recaps of our spring break matches thus far please visit: http://athletics.middlebury.edu/sports/mten/index.

We warmed up well this morning at the Pomona site and will take the courts soon for this scheduled 4pm match. The boys seem composed and at the same time eager, as we are all looking forward to todays big test.  Thursday we will play UC Riverside at the UCR campus before our most anticipated match this Saturday against Claremont Colleges. Saturday’s match against CMS will be a rematch of last years NCAA Team Championship, a match we have been anticipating for a very long time.

We want to quickly recognize all the family and fan support we have experienced over spring break. A quick thanks to Mrs. Welch for treating our team to dinner and being a huge supporter through our first two matches. Also a quick thanks to Mr. and Mrs. Campbell along with Mrs. Martin, for their continued support over this spring break in California. We couldn’t do what we do without the efforts from so many fans and family members and to be honest we wouldn’t want to. We will keep you posted on the match results and as always Go Panthers. 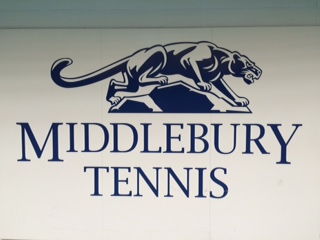 This past Saturday the young men of Middlebury tennis came out guns blazing. Spring season opened against #22 nationally ranked Bates College of Maine, a solid team with a reputation of competing hard every time they play. With approximately one month of prior training the Panthers were more than eager to get this spring season going, and what a beautiful start it was.

As the doubles began a sense of focused drive could be felt throughout Nelson Arena. The Panthers got early breaks at all three doubles positions, taking the momentum and not looking back. First off was number three William DeQuant and Timo Van Der Geest with an 8-2 victory. This European pair has shown massive improvement over the past month of practice and are playing the type of attacking and aggressive doubles we coaches are so happy to see. Next off was doubles pair Palmer Cambell and Hamid Derbani with an 8-6 victory at the two position. Losing their early break Palmer and Hamid had to fight through the finish, and at 7-6 put a very clean return game together to break for the match. When this team is right they are capable of playing nasty doubles, and are only going to get better with time. Rounding up the sweep was our one team of Noah Farrell and Ari Smolyar with an 8-5 victory. This match was a battle to the finish and with a couple breaks late in the pro-set Noah and Ari sealed the 3-0 start for the Panthers. With so much work this past month on our doubles it was an effort we could all appreciate.

In singles Will DeQuant continued the Panther momentum with a dominating 6-1, 6-0 victory at the number four position, playing attacking and inspiring tennis from start to finish. Next off was senior Palmer Cambell with a 6-4, 6-2 win at the number three position. Palmer was down a break early in the first set but settled in and held the course. With the match already decided the remaining four singles players continued the Panther dominance, winning all of their matches. Number two Ari Smolyar had a straight set 6-0, 6-4 victory competing well when he needed it most, and number five Hamid Derbani absolutely overpowered his competition with a 6-1, 6-2 victory. One highlight of this match was the effort by top Panther Noah Farrell in his 10-point super breaker after splitting sets. Noah was substantially ahead in the breaker but his Bates competitor fought hard clawing his way back into the match. After being unable to convert on numerous match points, Noah later faced being down match points himself. Down 10-11, onlooker’s jaws dropped as Noah stepped up hitting a screaming backhand winner to tie the breaker at 11-11. Next point Noah worked the point again, looking for his opportunity to attack, and stepped up to a forehand for another HUGE winner. Noah won the next point after an opponent's error to put the overall score to 8-0 Panthers, it truly was a fantastic effort. Last off was sophomore Timo Van Der Geest with a 6-1, 6-1 victory at the number six position. Timo has shown major improvement from last season and this singles effort was a clear demonstration of just that.

Immediately after the Panthers went outside for another 9-0 victory against Hamilton College of New York. For scores please check the Middlebury Men’s Tennis Website. Straight set victories were won at all spots, including players who did not play in the Bates match; Kyle Schlanger, Peter Martin, Cole Sutton, and Jack Welch. Overall it was a brilliant start for the Panthers, setting the tone for the type of season ahead that we all anticipate. A quick thanks to all the parents and fans for their support, your presence makes such a difference to all of us players and coaches.

Tomorrow morning at 10am we face #9 Wesleyan of Connecticut here in Nelson Arena. This team is talented and tough, showing that they are clearly a top ten team by already beating the number four nationally ranked team this season. Today at practice our boys looked sharp, fit, and focused. Our commitment is to compete and fight from start to finish, and most of all do it together. It is going to be a great test, and one we are all excited for. We will keep you posted,