Closing Up the Fall Season

Panther Nation,
Following a unique Davis Cup style tournament at Tufts, and an innovative week of training with guest coach, Morgan Shepard, the Middlebury Panthers’ fall season has come to a close. Intigrating our all-star freshman class with the rest of our squad was one of our early goals as coaches, and we couldn’t be more thrilled with the skills, leadership, and personalities brought in by our newcomers. 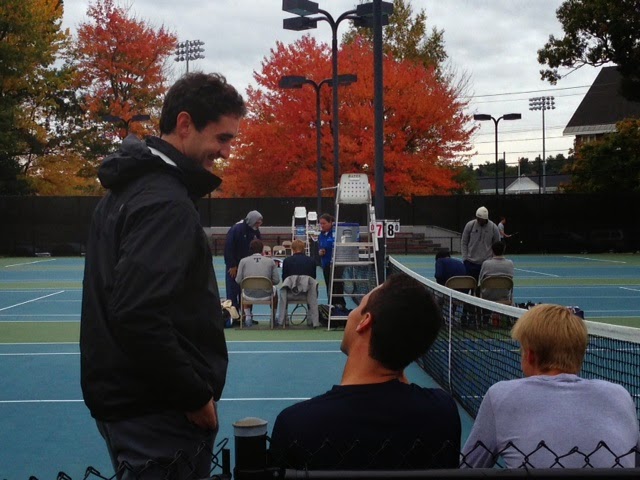 We are always striving to create a team environment where we compete fiercely against each other while maintaining respect and the ability to congratulate each other on good play. This can be a hard line to walk as emotions on court can heat up quickly. Our final fall event at Tufts was a perfect test in this regard since several of our two-man teams met each other late in the draw as we dominated most of the tournament.

The duo of Ari Smolyar and Pete Heidrich fought for the A-flight title against teammates Courtney Mountifield and Will De Quant. With this blockbuster final set, both coaches hoped to see a closely contested but respectful match. The stakes were raised with each fist pump by Smolyar, and much improved freshman, De Quant, refused to back down, sending a few “come on’s” back to the Smolyar/Heidrich duo. Even the cool headed Mountifield offered up a jolt of intensity, giving Smolyar a stare down as one of his backhand lobs landed gently on the back baseline for a winner.

After the smoke cleared, Ari and Pete rose from the ashes as victors in a 2-1 team victory. However, we were proud of both teams for their acknowledgement of their opponents’ good play and for their intensity that never got out of hand. Hats off to the Panthers here.

Other highlights from the event included freshman pair, Noah Farrell and Kyle Schlanger, continuing their inspiring doubles play by complementing each other’s strengths well. Kyle’s stealthy and smooth net play continues to get fans out of their seats.

We returned from Tufts with one week of practice left before entering the off-season. For this week of training we brought in coach Morgan Shepard, former DIII NCAA singles finalist, former Boise State assistant coach, and current master of somatic psychology with relation to athletic movement. Morgan played for Bob in the early 90’s and we couldn’t wait to have him work with us for our last week of training. Morgan spent individual time with everyone, focusing on stroke mechanics with a special attention to body awareness through the swing. Morgan certainly has a unique mind for the game and his teachings were enlightening; everyone expressed gratitude as Morgan was on court from 8:30-5:30 through out the week giving private lessons.

Now in the off-season, the guys are taking a week to rest their bodies and focus on mid-term exams. Once they are itching to get back on the court, our seniors will lead short but sweet workouts and practice sessions for all.

A very important final note: We’d like to thank our team parents for their amazing support this fall season. At every tournament, home and away, we had a wonderful showing of family who made each event more special and were incredibly generous with offering the boys lunch and snacks. Thank you parents!

We’ll pick back up in February with the start of our dual match season. Until then, happy holidays from Panther Town and we wish everyone the very best!