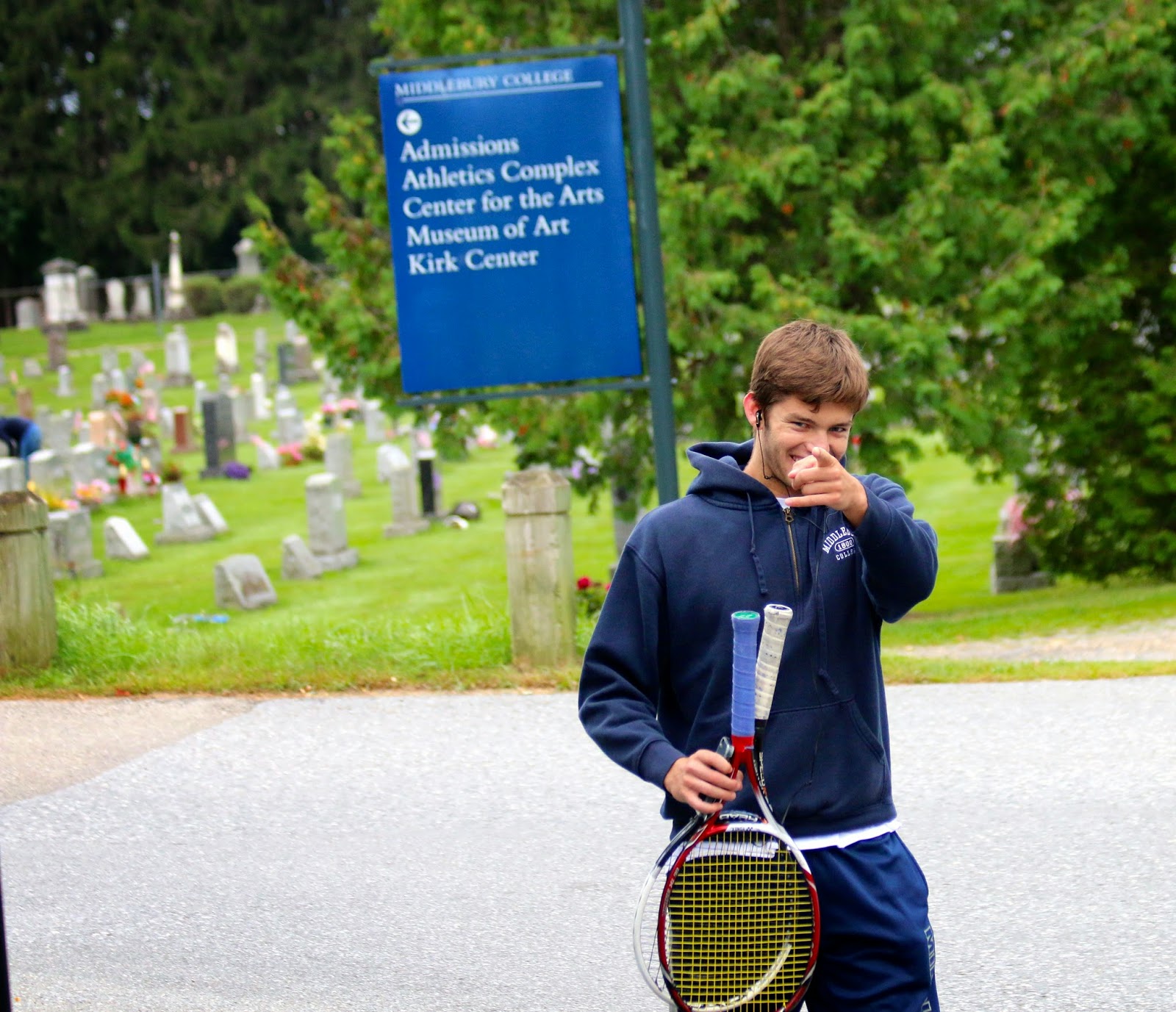 It’s 9AM and matches are just underway at day two of the ITA Northeast Regional here in Middlebury. With temperatures predicted to hit 80 degrees this afternoon, action on court will be hot in multiple ways. Marquee round of 16 matches include Jackson Frons taking on Andrew Yaraghi from defending national champions, Amherst. Jackson outlasted 8th seed Dan Carpenter from Trinity to set up today’s Midd-Amherst clash. Midd freshman, Noah Farrell cruised to two victories yesterday and takes on Zain Ali from Tufts this morning. The last Midd player left in the singles draw is Ari Smolyar, who recorded two straight sets victories yesterday and takes on Bates’s top player in Pierre Planche. 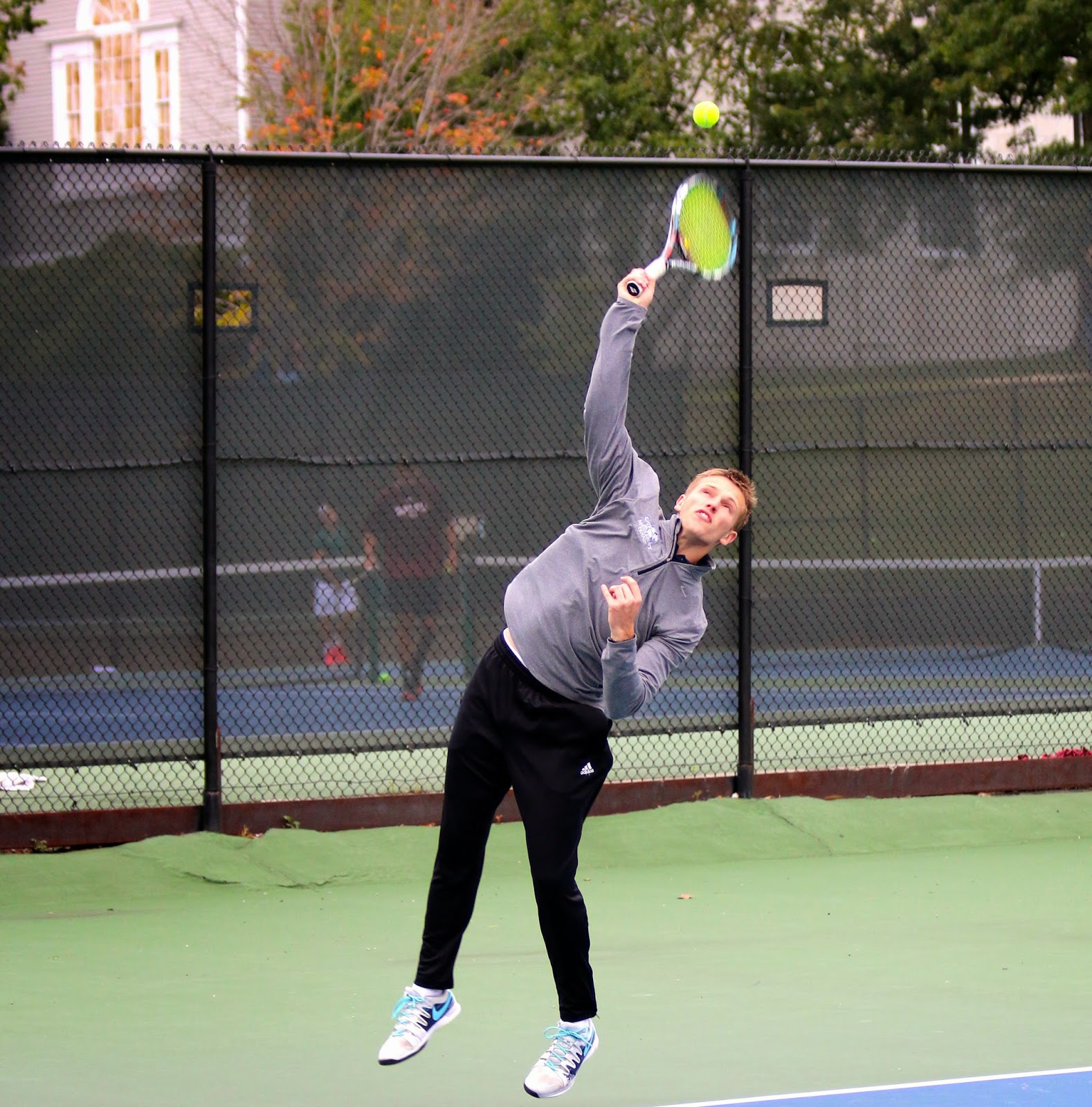 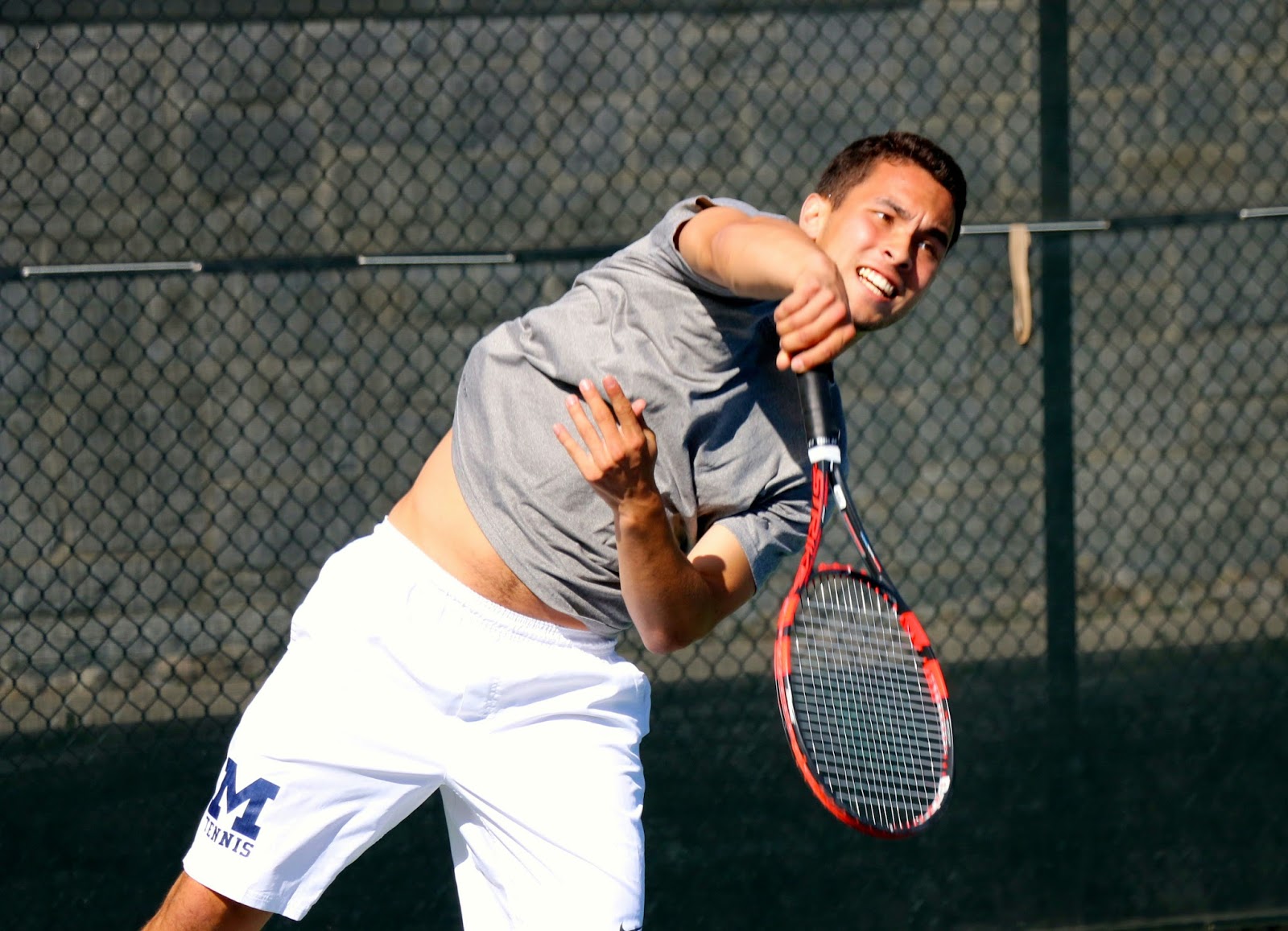 Special thanks to Panthers Will DeQuant and Timo Van der Geest in their help running the Proctor scorers table.


Welcome back Midd Tennis fans to the start of the 2014 fall season. With 5 freshmen and one junior college transfer joining our squad, much of our early September training has been focused on bringing the newcomers up to speed on and off the court. Without further ado, let’s introduce the newest panther additions.

Noah Farrell
Hailing from Wilton Connecticut, Noah enters Midd after being ranked 1 in New England for singles and doubles in the 18s and as high as 86 on tennisrecruiting.net
Why he chose Midd: “While looking for schools, I was looking for a school that has a great academic institution, and a tennis team that has a great chance to win the national championship. Midd fit both qualities.”

Hamid Derbani
From Casablanca, Morocco, Hamid competed for his home country in the Junior Davis Cup in San Luis Potosi, Mexico. He was ranked as high as 480 in the ITF junior world rankings.

Will DeQuant
From Monaco, France, Will enters Middlebury having played #1 doubles and #2 singles for Saint Stephens Episcopal High School.
Why he chose Midd: “When I visited, I fell in love with the campus; I had great admiration for Coach Hansen and the dedication and hard work of the team.”

Kyle Schlanger
A native of North Carolina, Kyle previously was ranked as high as 28 in the Southern Region and competed in team zonal competition in both the 16’s and 18’s.
Why he chose Midd: “The classes are unbelievably well taught and the professors love nothing more than to teach their respective subjects.”

Timo van der Geest
Arriving at Midd from the Netherlands, Timo brings some team experience, having competed for the Oegstgeester Lawn Tennis Club in Holland, winning the regional championship in 2011.
“My first week Middlebury has brought me what I was hoping for. So far it has been great spending time with the tennis team both on and of court and I'm more than excited for the coming year!”

Charlie Oberrender
Younger brother of former panther star, Will Oberrender, Charlie brings to the team a wealth of high school tennis experience and is our only lefty on this year’s squad.

Fall action began last weekend with our Middlebury Invite event, which featured participants from Bates, Trinity of Connecticut, RPI, Tufts, Skidmore, and Brandeis. We were very excited to see our new players compete for the first time as well as track the progress of our returners. We were thrilled at the level of both groups and had some excellent results by the end of the weekend.

The finals of the singles A flight featured Midd freshman Noah Farrell against veteran panther Ari Smolyar. Noah entered the final after beating the tournament’s top seed from Brandies in the quarter finals and then knocking off the talented big hitting Bulgarian from Tufts in the semifinals. Ari found his way to the final after squeezing through several tight super-breakers which were played in lieu of a third set. In the final, Ari returned to his clutch ways by edging his teammate in yet another super-breaker. Noah played spectacular tennis for a set and half before Ari mounted a comeback to take the 2nd set and then the match.

Other highlights included Jackson Frons/Allen Jackson’s roaring comeback against a Tufts team who found themselves up 7-2 before Jackson and Allen reached top form. The Midd duo reeled off 7 straight games to take the match 9-7, and a spirited celebration on match point flashed serious panther muscle.

The freshman doubles team of Kyle Schlanger and Will DeQuant, ran the table in the B flight doubles draw as they improved with each match en route to another all Midd final against teammates Jackson and Allen. With the sun going down and all other teams already on the road, a freshmen vs. upperclassmen clash was set. Both teams competed aggressively while maintaining respect for their teammates; the freshman came out victorious after a spectacular match point just before the day's last light disappeared behind proctor dining hall.

Also notable was Peter and Chris’s run to the final of the doubles A flight. The duo’s experience and teamwork oriented mindset carried them to 3 straight victories in the top flight. In addition, Allen Jackson reached the B flight singles final before falling to a talented Skidmore player. Still to be played is the C flight singles final, where Kyle Schlanger and Chris Frost will vie for the title.

Next up for the panthers is the ITA Regional Tournament, set to begin September 26th here at Middlebury. Stay tuned for more updates!
Posted by Marc at 1:04 PM 1 comment: