We are incredibly proud of the fact that year in and year out we set ambitious goals, including our ultimate aim of competing for an NCAA team title. This year our goals were particularly ambitious given that we started the year as an unranked team, having had the last two spring seasons derailed due to the pandemic. Even though we did not win the NCAA team championship, the coaching staff knows that our team put in the effort, hard work, and passion that championship caliber teams do. We positioned ourselves to take a swing at the team title, and in doing so achieved many impressive feats during the year along the way!

We want to thank all our players for their incredible efforts and passion, as we felt incredibly fortunate to be able to coach this wonderful group of young men. It was a season that our seniors should be particularly proud of, and we look forward to taking our momentum into next year!

Coming in hot off a NESCAC team championship, the Panthers were again poised for another exciting NCAA team run! We were fortunate to be able to host the regional rounds at the Proctor courts in Middlebury and then traveled to Orlando, Florida to compete at the prestigious USTA National Campus courts from the elite eight onwards! We could not have enjoyed the intense competition and opportunity to display how much our collective tennis games had come since the beginning of the year.

As this will be our final blog post of the year, the coaching staff wants to extend our gratitude toward so many key individuals that help our program to operate optimally! We want to begin by thanking our incredible Middlebury College Athletic support staff, in particular Erin Quinn (Athletic Director), Beth Fitzgerald (Team Athletic Trainer), Ali Paquette (Director of Athletic Communication), Rob Barr (Women’s Tennis Head Coach), and Hannah Fleckenstein (Women’s Tennis Assistant Coach). Each of you helps to make our team better and our job as coaches much more fun! We also want to express our thanks to all the Middlebury Tennis Nation. It is a true pleasure for us to receive so many messages and support from our alumni, family, and friends.

We would be remiss if we did not thank our incredible group of team parents! It is amazing to see how much love and support you bring to our program, and we take pride in sharing our team’s accomplishments with you. Thanks again for all you do to support our group!

Finally, thank you Bob Hansen for all you have given to Middlebury Tennis and congrats again on your retirement! We plan to have another celebration of Bob’s unparallel career in the coming year!

Thanks again for your support and for sharing in our journey this season!

Posted by Andrew at 7:46 AM No comments:

The Panthers (18-2) Love the Postseason!

As we wrapped up our regular season, the Panthers continued to demonstrate or competitive fire and grit earning multiple wins over challenging conference opponents. Feeling that our group excels at bringing our best tennis in the biggest moments, we were excited to see what we could do in the NESCAC tournament having fought to earn the #1 seed as a team. Despite challenging conditions and worthy opponents, the Panthers collectively dug in and we came out victorious to earn our 10th NESCAC team title in Middlebury Men’s Tennis history (2nd in a row)! The coaching staff could not be prouder of our group after 17 straight d3 wins and we are pumped up to keep rising as a team heading into NCAAs. As we like to say loud and clear, THE PANTHERS LOVE THE POSTSEASON!

Highlights from Colby and Bowdoin Weekend

In our final home matches of the year, the Panthers competed well in challenging outdoor conditions at our favorite Proctor courts! Colby was ranked #27 in the nation, and we knew would be fired up to challenge us. After taking a 2-1 doubles lead in some very close matches, the Panthers shined in singles play earning a sweep of all 6 singles positions! This included five straight set wins and some locked in tennis from up and down our lineup! More details of the match can be found here.

The next day we took on #9 Bowdoin and knew we would be in for a fight. After dropping prosets at #1 and #3 doubles, #2 doubles came in clutch to post an 8-6 win to keep the Panthers in striking range heading into singles play. When the going got tough in this match, our grittiness and belief came through to help us regain the momentum. We got started with #6 singles Zihao Yuan earning a decisive 6-0, 6-3 win and then earned wins in 3 of the of 4 three-set match that were played including Stan Morris (#1 singles), Aidan Harris (#3 singles), and Neel Epstein (#5 singles)! Even though we felt like we did not necessarily play our very best at each spot, we knew earning a hard-fought win in a tightly contested matchup would help our confidence in knowing we continue to be battle tested and ready to adapt and keep competing no matter the situation. More details of the match can be found here.

As a team, our doubles play has been on the rise throughout the course of our regular season and we were determined to set the tone for our matches by taking it to our opponents in doubles. We did exactly that throughout the weekend going 8-1 in doubles play, sweeping the doubles in the quarterfinals (vs Trinity), semifinals (vs Amherst), and then taking two of three in the finals (vs Tufts)!

In the quarterfinal round, Trinity battled us from start to finish but the Panthers kept up the pressure from all spots in the lineup. Zach Hilty (#4 singles) nudged our lead to 4-0 with a straight set win followed by a straight set clinch from Neel Epstein (#5 singles). See more match details here.

In the semifinal round, Amherst was coming off a strong victory over Bowdoin and we knew we needed to come out ready. After a doubles sweep, the match was played on only 3 indoors courts so we knew it might be extra challenging to build on our momentum to earn the next two points to earn the team victory. With incredible poise from our freshman, Neel Epstein (#5 singles) earned an impressive 6-1, 6-0 decision to quickly push the score to 4-0. Both Aidan Harris (#3 singles) and Zihao Yuan (#6 singles) were competing and staying tough throughout very high level matches and each was deep into a third set when the match got clinched. It was none other than one of our senior captains, Stan Morris (#1 singles) who was able to find the clinch for the team with a straight set victory over a strong opponent at the top spot. See more match details here.

In the finals, we were thrilled to get another swing to take on Tufts who represented our only d3 loss of the year in our first match of the season all the way back on March 12th. Tufts was ranked #3 in the nation and we were fired up to see what we could do in our biggest moment of the year so far. The match was incredibly well-played on both sides and was an exciting tilt from start to finish. After Tufts took #2 doubles, the Panthers took charge via an 8-6 come from behind win at #1 doubles (Morris/Vilys) followed by an 8-5 victory at # 3 doubles (Hilty/Epstein). In singles, the Panthers took 4 of 6 first sets and were keeping the pressure on with good fight from all spots throughout our lineup. First to earn a victory for us was Stan Morris (#1 singles) who fought back from a first set deficit to win 7-5, 6-1 to put the Panthers two matches away from the tile. Next to finish was Zihao Yuan (#6 singles) whose steady and relentless play earned a 6-4, 6-4 win getting the Panthers to within 1 match of the title. Epstein (#5 singles) was early in third set play when senior captain Zach Hilty (#4 singles) used brilliant and ferocious tennis to secure a 6-4, 6-3 win clinching the NESCAC title for the Panther squad! WE DO LOVE THE POSTSEASON! See more match details here and some photos of our group with trophy below. 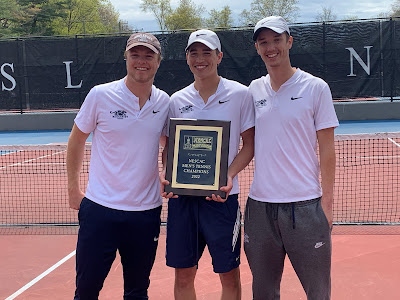 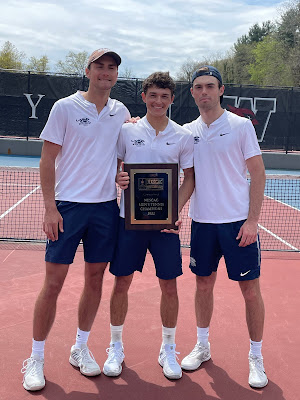 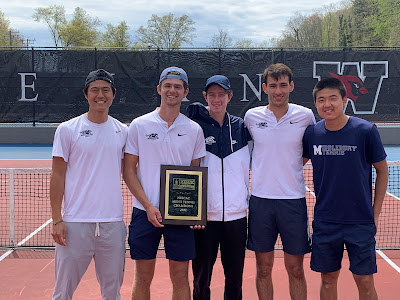 - Our first match of the NCAA tournament will be played on Friday, May 13th at 10am EST.

- Our NCAA regional final will be played on Saturday, May 14th at Noon EST to see who earns a spot in the Elite Eight and to travel to the NCAA Championship site at the USTA National Campus in Orlando, Florida.

Thanks for the wonderful support from our alumni, friends, and family! Our successes would not be possible without it!

Posted by Andrew at 4:17 AM No comments: